The Hughes H-4 Hercules (also known as the “Spruce Goose”; registration NX37602) is a prototype heavy transport aircraft designed and built by the Hughes Aircraft company. The aircraft made its first and only flight on November 2, 1947, and the project never advanced beyond the single example produced. Built from wood because of wartime restrictions on the use of aluminum and concerns about weight, its critics nicknamed it the “Spruce Goose,” despite it being made almost entirely of birch rather than spruce.
The Hercules is the largest flying boat ever built and has the largest wingspan of any aircraft in history – longer than a football field. It is over five stories tall and is larger than a city block.

In 1980, the Hercules was acquired by the California Aero Club, which put the aircraft on display in a large dome adjacent to the Queen Mary exhibit in Long Beach, California. The dome was created to house the historic plane when it went on public display in Long Beach in 1983.

In 1988, The Walt Disney Company acquired both attractions and the associated real estate. Disney informed the California Aero club that it no longer wished to display the Hercules after its highly ambitious Port Disney was scrapped.

After a long search for a suitable host, the California Aero Club awarded custody of the Hughes flying boat to Evergreen Aviation Museum. Under the direction of museum staff, the aircraft was disassembled and moved by barge and truck to its current home in McMinnville, Oregon (about 40 miles (60 km) southwest of Portland), where it has been on display ever since. The Flying Boat arrived in McMinnville on February 27, 1993 after a 138-day, 1,055-mile (1,698 km) trip from Long Beach.

The dome was a big thing in its own right: It was billed as, and probably remains, the world’s largest free-standing geodesic structure. It was tall enough to enclose a 12-story building and roomy enough to fit a football field, plus fans. 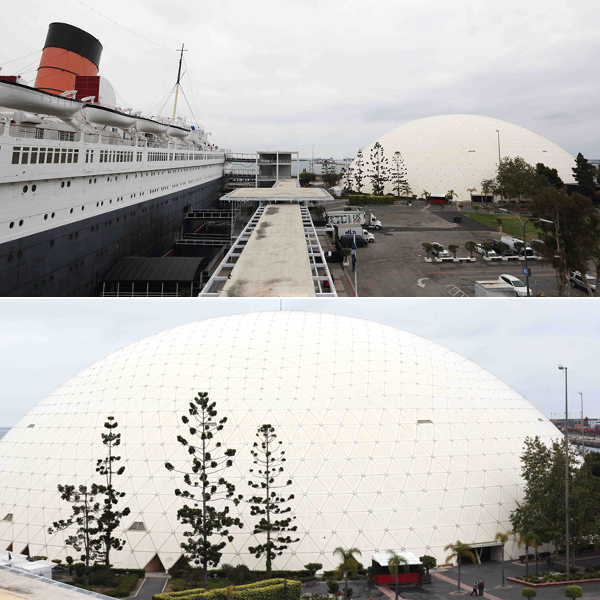